Depending on who you believe the rolling hills, meadows and lakes beneath Mount Washington Alpine Resort is either Forbidden Plateau or Paradise Meadows.

The legend of the latter goes something like this: when an enemy attacked the Komox First Nation they sent their women and children to hide in the sub-alpine area above the Comox Valley. The men survived the threat but the rest of the villagers disappeared without a trace, possibly at the hands of Sasquatch. Hence Forbidden Plateau.

Of course, this is fake news. Literally. It originated in a phoney newspaper article crafted to lure tourists to an early lodge on the plateau.

The name Paradise Meadows has always been accurate. No more so than during the winter, when metres of snow transforms the marshes and old-growth forest into a snowy wonderland.

Just driving up is a trip. Climbing 1,000 metres from the valley, the world goes from drab to bright as the snowbanks quickly grow until they tower over the road. Mount Washington often records the deepest snowpack in Canada.

Continuing beyond the downhill ski area the road ends at Raven Lodge, the cozy home of the nordic network. Upstairs in the airy timber frame building is a small store and self serve food bar. Downstairs are rentals for snowshoeing, cross country skiing and fat biking (tip: order online to skip the line).

These days sitting inside is discouraged, but there are picnic tables and Adirondack chairs positioned to take advantage of the southern exposure. Nothing feels better than absorbing a dose of alpine-strength vitamin D after a week of grey skies. And if the kids don’t have patience for that, distract them with the neighbouring tobogganing hill.

Recharged, it's time to hit the trail. Raven Lodge is the node of the trail networks, whatever the mode.

The newest addition is the fat biking. It pairs a mountain bike with extra-wide tires that float and grip snow and ice. It’s a fast-growing sport and Mount Washington is the only reliable place to try it out on Vancouver Island. There are three loops to choose from and all include a thrilling, twisting descent and grand views into the high mountains of Strathcona Park.

Snowshoeing, too, has never been more popular. For good reason. It’s naturally socially distanced, easy to learn and is basically walking on water. The eight dedicated trails offer a progression from easy stomping through open meadows along the Old Cabin Loop to the demanding climb up to a scenic ridgeline on aptly named Great Big View. And because no member of the family enjoys the snow more than Fido, dogs are welcome on the Snow Paws trail.

The most memorable way to try the sport is on Saturday nights when the Raven Lodge hosts snowshoe dinners. The experience starts with a guided walk through Paradise Meadows by headlamp and stars. Then it’s back to the warmth of the lodge for a cheese fondue feast.

But the jewel of Mount Washington’s nordic area is the 55 kilometres of cross country ski trails, groomed for both skate and classic style skiing. Several national teams trained here before the 2010 Vancouver-Whistler Olympics and Paralympics and the Canadian national team often uses the deep snowpack to extend their season.

But don’t let that reputation intimidate. The Learn to Ride (and glide) program includes rental gear, a trail pass and a lesson. Experienced instructors introduce the sport and get new skiers sliding before setting them out for their first solo adventure. And while there are plenty of tough trails - Lake Trail is the test piece - some of the nicest ones are beginner and intermediate friendly.

Lookout trail slides a short distance west to a promontory with views of some of the highest mountains on Vancouver Island and down to the ocean near Campbell River. For a longer ski, head into Strathcona Provincial Park on the Ponds and Paradise Meadows loops. They take in the best of the gently rolling terrain. Upper West is a little more challenging, but it’s almost all downhill – adrenaline junkies will love it. To get there, ski over to the alpine area and jump on the six-person Hawk Chair. From the top it’s about nine kilometres of epic views and (mostly) effortless skiing back to the lodge.

That’s the thing about the nordic side of Mount Washington. Most people assume it’s all hard work. And it can be. But it can also be the easiest, budget-friendly way to enjoy winter on Vancouver Island.

Travel 10 minutes on any trail, step a few more paces into the forest and just like that: solitude. It’s a more valuable commodity than ever and so easily achieved at Mount Washington. After a dose of that, there’s no doubt which name this slice of paradise deserves.
Where to eat:
Locals know the Raven Lodge has the best food on the mountain. Now offering grab and go service daily. For apres socializing head over to the Alpine Lodg for Ted's, or to one of several local breweries in the Comox Valley, like Gladstones or Aces.

Where to stay:
On hill accommodation ranges from sprawling chalets to trailside condos. Some are in the walk-in only village and others are drive up. Thirty minutes downhill in the valley are more options including hotels and hostels.

What else to do:
There’s downhill skiing and tubing at the resort. Or turn the visit into an alpine to ocean adventure with a walk at Goose Spit, one of the nicest beaches in the area. And Cumberland’s mountain bike trail network is one of the most expansive and varied on Vancouver Island.
+ 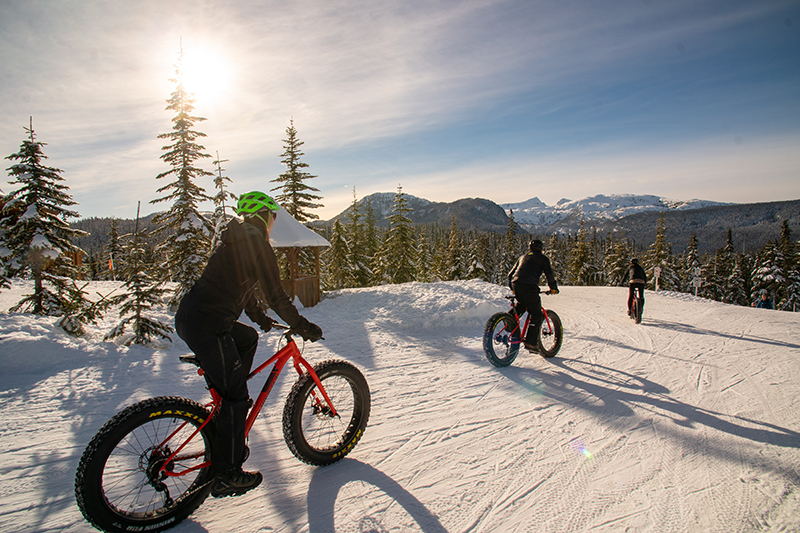 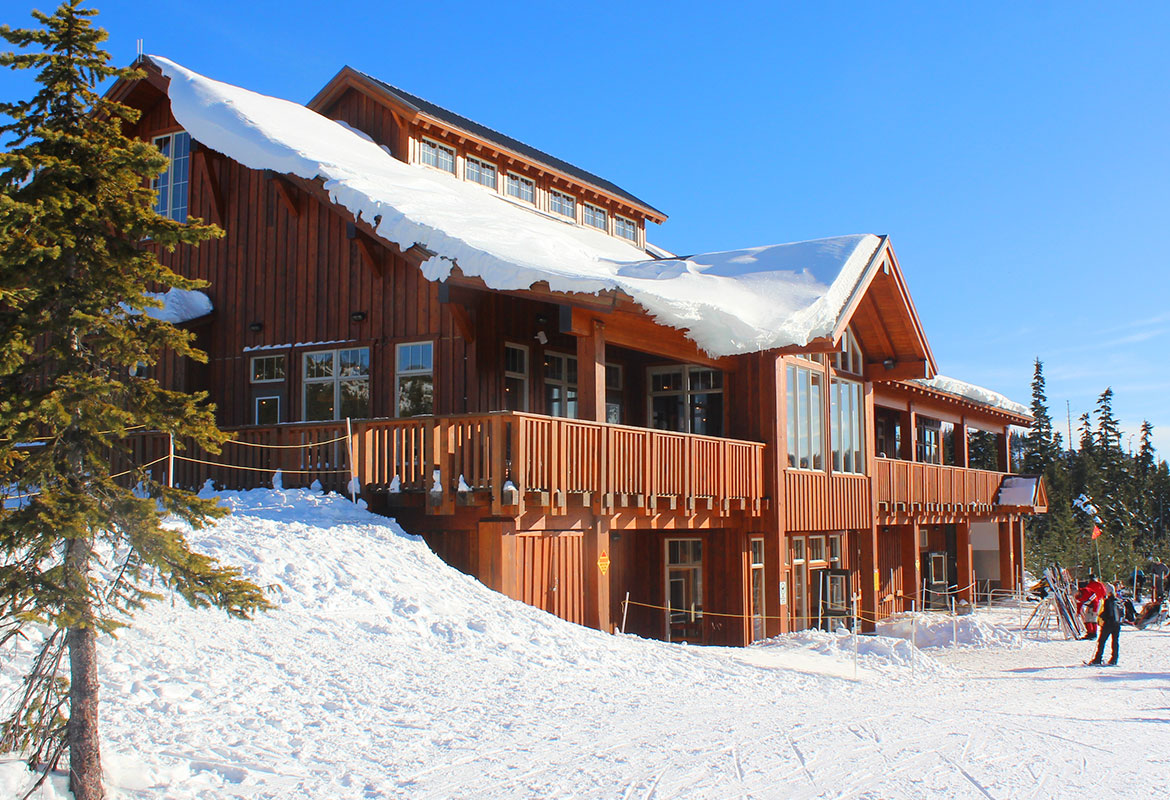 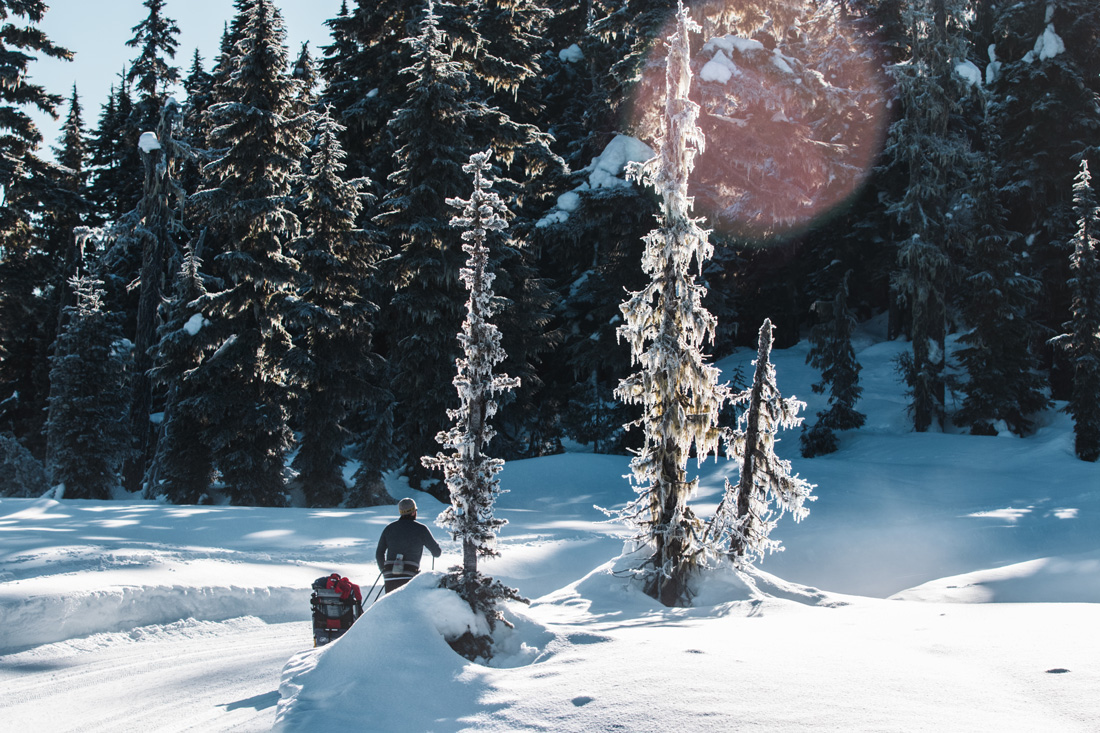 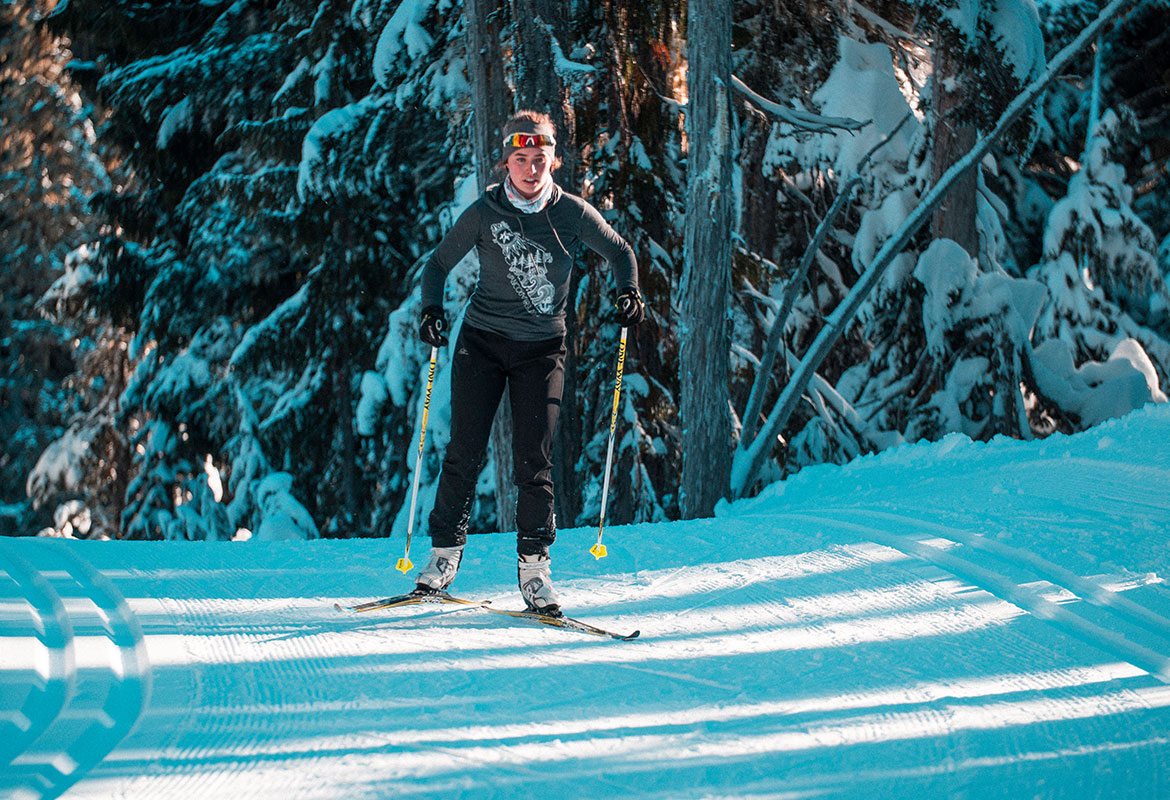 Explore the wilds of Strathcona Park as you meander through the snow-covered trees surrounder by rugged ice-capped mountains. The quiet serenity of the old-growth forests will do more for your well-being than a day at the spa.
Nordic Conditions 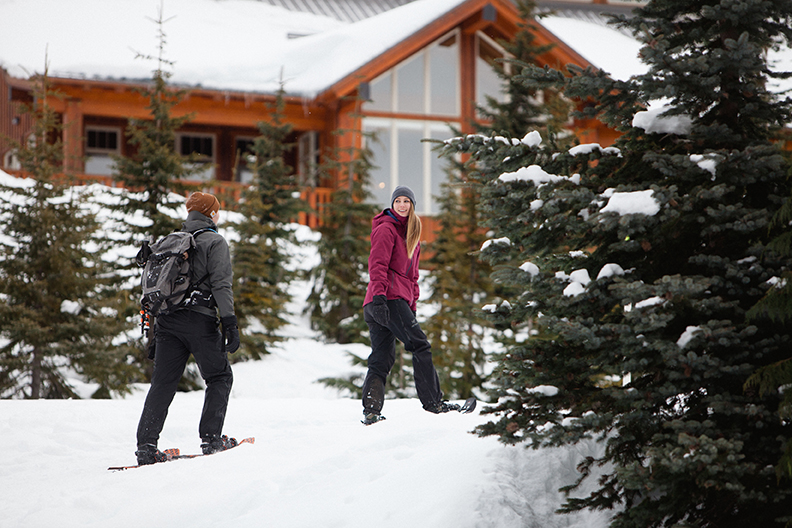 Snowshoeing at Mt. Washington will transport you to a magical wonderland featuring 22km of meandering trails with stunning views. We also offer Fat Biking on specific snowshoe and cross-country ski trails (weather permitting), in addition to our new Fat Bike-specific trail "Marmot's Mess". All trail passes, rentals and maps are available at the Raven Lodge. 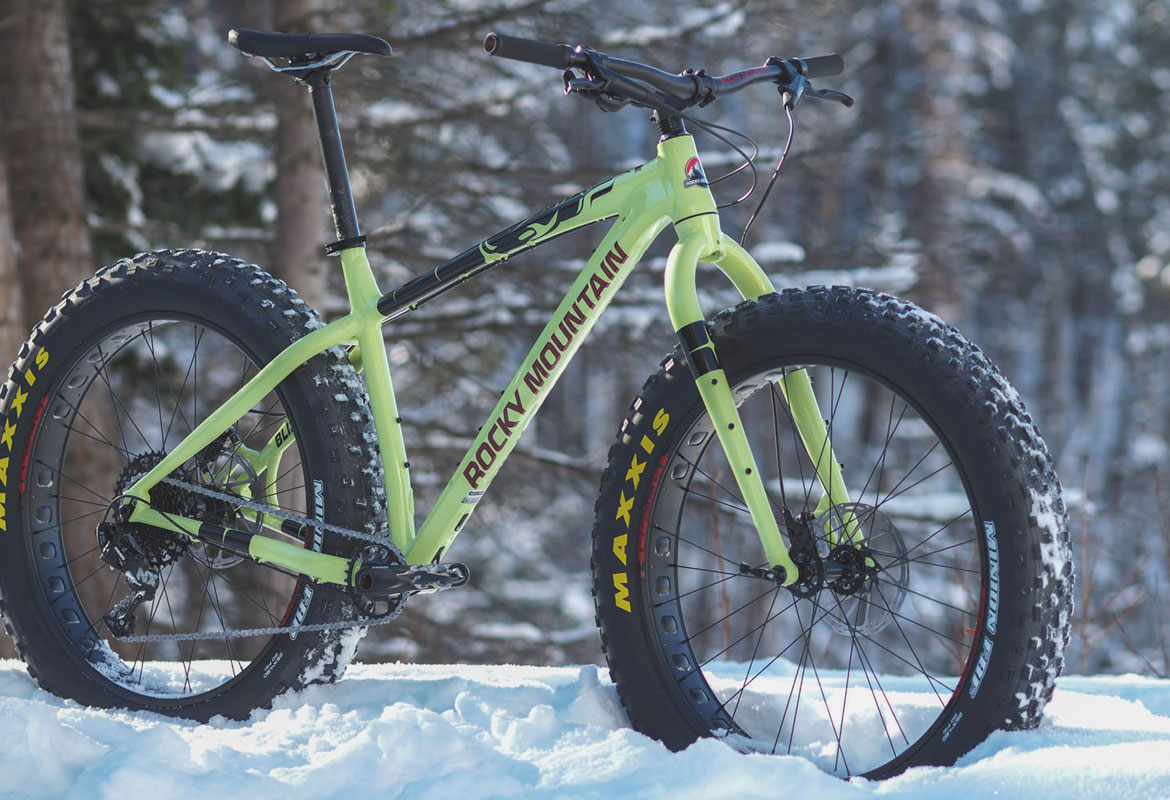 Winter fat bikes are the newest way to explore Mount Washington in the winter!  A "fat bike" is a version of a mountain bike, with wide tires which provide extra traction and stability in the snow.  Mount Washington Alpine Resort now offers groomed trails, rental bikes, and programs for winter fat biking.

Sign up to receive emails from us to stay in the know!

We are grateful to work and play within the unceded traditional territory of the K’ómoks First Nation in the mountains of the Pentlatch, E'iksan, Sahtloot and Sasitla peoples. ©2022 Mount Washington. All Rights Reserved. Vancouver Island, British Columbia, Canada